Relationship between Depression and Cholesteatoma 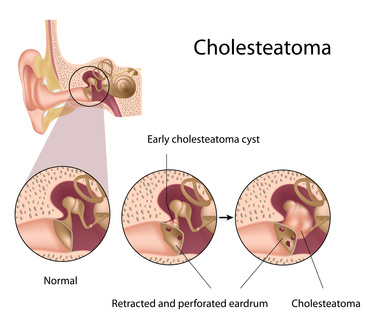 Even though a relationship between cholesteatoma and depression was observed in clinical practice, it was not strongly established in the absence of any significant research to support the link between these two diseases. It was the team of researchers led by Dr. Chin-Lung Kuo who performed the first population-based study to establish the potential association between cholesteatoma and depression.

Cholesteatoma is an abnormal growth of keratinizing squamous epithelium in the temporal bone, mostly caused by middle ear infections. Even though it is noncancerous, it causes significant damage in the middle ear cleft, resulting in foul-smelling ear discharge, tinnitus, hearing impairment, and even the risk of facial paralysis. The physical impairments may have psychological implication such that the patient becomes socially withdrawn, which may lead to depressive disorder.

It has been reported that the annual incidence of cholesteatoma ranges from 9.2 to 12.6 cases per 100,000 adults. Interestingly, it varies according to race and is found to be more prevalent in Caucasian populations.

Dr. Chin-Lung Kuo and his team conducted the 3-year retrospective cohort study using the Longitudinal Health Insurance Database (LHID2005). There were 1820 patients newly diagnosed with cholesteatoma between 1997 and 2007 included in the study group and 9100 non-cholesteatoma subjects in the comparison group.

Even after adjusting for potential confounders, the depression-free survival rate of cholesteatoma patients was very low in 3 years. The study also revealed that the incidence of depression was higher in women than men, the figures being 11.60 and 8.02, respectively, per 1000 person-years.

The incidence of depression was higher in patients aged over 60 years compared to the other age groups.

It is reported that the relapse of cholesteatoma in children is 2 to 10 times higher than adults, which necessitates more revision surgeries and they are more likely to develop depression. However, in this study, Dr. Chin-Lung Kuo observed a lower depression rate in children with cholesteatoma, which was only 2.85 per 1000 person-years. This inconsistent observation suggests that the depressive symptoms among children need to be subject to routine screening.

The success of this study by Dr. Chin-Lung Kuo and his team can be attributed to the application of the National Health Insurance database, large sample size, marginal selection bias, and a thorough follow-up of each patient.

In conclusion, the study by Dr. Chin-Lung Kuo provided strong evidence, which was unrecognized earlier, to establish the potential link between cholesteatoma and depression. It is necessary to conduct routine psychiatric screening and monitoring of cholesteatoma patients for detection and treatment at the beginning stage itself. Despite the accuracy and acceptability of this population-based study, more prospective studies need to be carried out for additional confirmation.