We report a new perspective on the case of a 22-year-old female with no significant medical history who posed a diagnostic and therapeutic challenge; a giant cystic mass of the abdominal cavity. Work up was notable for no significant laboratory abnormalities but a large cystic lesion noted on imaging. The patient underwent open resection. A giant cystic abdominal tumor may present with the common and protean abdominal symptoms of bloating, pain, and early satiety from either mass effect or adhesions to surrounding structures. Caution is advised in attempting the laparoscopic resection of such tumors.

A 22-year-old female student presented with pain, early satiety, a dragging sensation in the abdomen, and weight gain. She had been diagnosed with irritable bowel syndrome several years prior based on the symptoms. Over the preceding 6 months, she reported increasing frequency of progressive nausea primarily with meals, emesis nearly every day, and constipation. She noted early satiety but no evidence of dysphagia or odynophagia. Overall, she had a 20-pound weight gain within 4 months prior to diagnosis. The patient had no significant past medical or surgical history. Within her family history, there was no history of ovarian disease, gastrointestinal malignancies, or cystic disease. She reported regular menstrual cycle with an age of menarche of 12. A pregnancy test at admission was negative. Prior to diagnosis she had taken to wearing exclusively yoga pants because belts were uncomfortable.

Physical examination was notable for diffuse abdominal distention and a fluid wave without peritonitis or evidence of a hernia. Percussion was dull throughout. A CT scan of the abdomen and pelvis noted a large cystic mass with internal attenuation, occupying the majority of the abdomen with mass effect resulting in superior displacement of the liver, spleen, stomach, as well as the majority of the small bowel located in the left side of the abdomen (Figure 1). Tumor marker studies, including beta-HCG, CA 19-9, carcinoembryonic antigen, and CA125 were negative.

After discussion of options including a laparoscopic approach, and the small but real risk of a cancer diagnosis, an open approach was judged best to avoid rupture of the cyst. The patient was taken to the operating room for an exploratory laparotomy. A 40-cm cyst arising from the right ovary was noted (Figure 2) and on full inspection of the abdomen there was a normal appearing uterus, normal left ovary and fallopian tube, normal pelvis and paraaortic lymph nodes, normal peritoneum, and normal bowel. Gynecologists, having obtained prior consent, performed a right oophorectomy and salpingectomy in continuity with the mass. She recovered rapidly with normal dietary intake. The final pathology of the 10.4 kg cyst was serous cystadenofibroma and ovary with hemorrhagic corpus luteum.

Slow, insidious, growth of the cystic mass in an otherwise young healthy woman obscured the diagnosis; presumably for several years. The differential diagnosis of diffuse, low grade abdominal pain, bloating and even weight gain is broad. However, the development of early satiety suggests the need for a more thorough evaluation. Once ordered, computed tomography rapidly established the presence of an abdominal cystic mass. Ultrasound or magnetic resonance imaging could also have pointed toward the correct diagnosis. The list of cystic masses of the abdominal cavity is long (Table 1). Size is a major determinant of the clinical diagnosis of such masses; although most adnexal cystic masses are benign, the possibility of malignancy mandates the need for accurate diagnosis and treatment [1,2]. Most authors have suggested that adnexal cysts that are unilocular, unilateral and less than 5 cm are benign [3]. 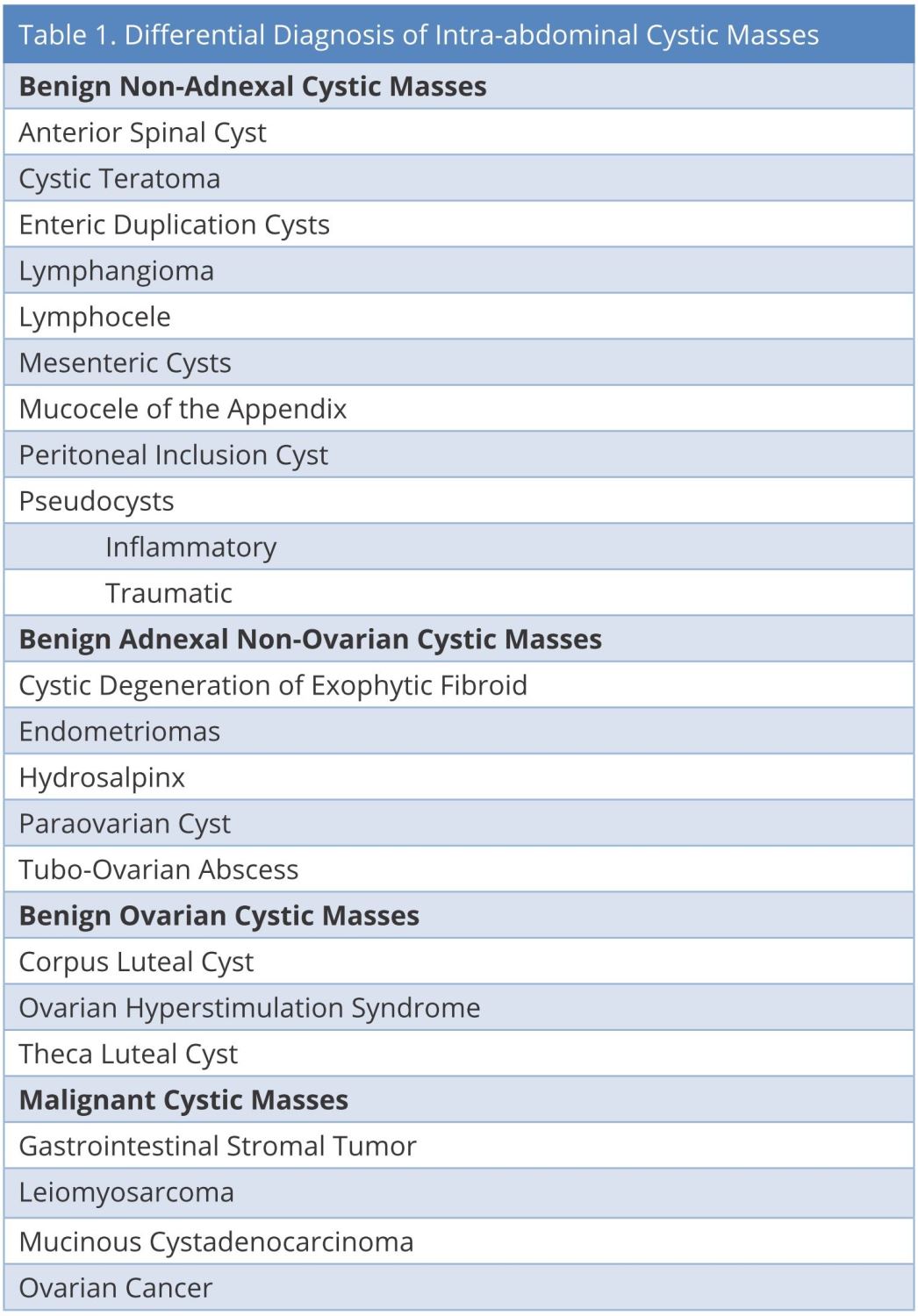 As highlighted by the current case, it is essential to consider gynecologic conditions in the differential diagnosis of cystic abdominal masses in women. Although ovarian cysts over 10 kg are rare with the advent of modern health care imaging, the most common etiology of benign tumors – cystic and otherwise – includes mature teratomas, fibromas, serous cystadenomas, mucinous cystadenomas, and Brenner tumors [4,5]. Ovarian serous cystadenofibromas as described here are characterized by a prominent fibrous tissue component in addition to the epithelial elements [6]. Despite the tumor size, histologically these cysts are benign and account for about 1.7% of all benign ovarian tumors [7].

Correct determination of the histology must inform treatment. There is an emerging literature for the laparoscopic removal of abdominal cystic masses, adnexal and otherwise [8]. However, caution is advised in the laparoscopic removal of abdominal cystic lesions, even if technically feasible [9]. In a series of sixteen laparoscopically removed mesenteric cysts, 25 % had malignant components (three cystadenocarcinoma, one leiomyosarcoma) [10]. In these cases, one had intraperitoneal spill and two had ‘questionable resection margins’ with no longterm follow up [8].

The concern about malignancy also arises in laparoscopic removal of ovarian cysts. A series of 77 laparoscopically removed cysts showed evidence of borderline histopathology in 3.7% and invasive cancer in 2.5% [11]. In the present case, although the patient’s age, tumor marker profile and the radiologic characteristics suggested the tumor was probably benign, it was judged safest to remove the tumor in a non-ruptured state through a conservative laparotomy incision to avoid any possibility of seeding a cancer throughout the peritoneal cavity.

For patients with vague yet common and protean abdominal symptoms, a giant cystic abdominal tumor should be included within the differential diagnosis. A through history and physical examination are necessary to discern any emergent need for intervention. Ultimate diagnosis is determined through imaging. When planning an operative intervention, caution is advised in attempting the laparoscopic resection of such tumors.

© 2018 The Author(s). This is an open-access article distributed under the terms of the Creative Commons Attribution 4.0 International License (CC-BY).