Type 1 diabetes (T1D) is caused by autoimmune-mediated selective destruction of insulin-producing β-cells [1]. Exocrine abnormalities, however, have been reported in the morphology, pathology, and function of the T1D pancreas over the past decades [2-4]. Exocrine pancreatic inflammation and reduced pancreatic weight have been identified in patients with acute-onset T1D [5] and slowly progressive insulin-dependent diabetes mellitus (SPIDDM) [6]. Until now, the absence of insulinotropic effects on pancreatic exocrine tissue has been proposed as a possible explanation for the reduced pancreas size in T1D [2-4,7]. A previous report, however, has shown pancreatic exocrine atrophy in T1D patients with surviving β-cells [8].

Recent radiographic imaging modalities, including computed tomography (CT) [9,10] and magnetic resonance imaging [11-13], have also shown reduced pancreatic volume (PV) in patients with acute-onset T1D irrespective of the diabetes duration. Reduced pancreas size has recently been observed in both adults with newly diagnosed acute-onset T1D [12] and islet autoantibody-positive non-diabetic donors [14]. This observation suggests that the atrophy of the pancreas is likely to begin before the onset of T1D. Very recently, we also reported that the pancreatic volume assessed by CT was significantly reduced in the newly diagnosed acute-onset T1D patients, but not in the virus-induced fulminant T1D patients, when compared to non-diabetic controls (non-DCs) [15]. These findings suggest that the autoimmune process contributes to the pathogenesis of reduced PV in acute-onset T1D.

Although unlikely to be intrinsically diabetogenic, the circulating islet autoantibodies against glutamic acid decarboxylase antibody (GADAb), insulinoma-associated antigen-2 autoantibodies (IA-2Ab), zinc transporter 8 autoantibody (ZnT8Ab), and insulin (all of which are generated from destroyed β-cells) are strongly associated with the development of T1D. Among the several islet autoantibodies, GADAb has been measured worldwide by radioimmunoassay (RIA). Glutamic acid decarboxylase autoantibodies-radioimmunoassay (GADAb-RIA) is frequently used to diagnose autoimmune diabetes. Although the pathogenesis of T1D and residual β-cell function demonstrably differ between acute-onset T1D and SPIDDM, the reduced pancreatic size and the presence of circulating autoantibodies to islet autoantigens seem to be common to both forms of diabetes. There are limited data reported on the relationship between PV and the titers of GADAb, IA-2Ab, and ZnT8Ab in acute-onset T1D and SPIDDM.

The aim of the present study was therefore to investigate the relationship between islet autoimmunity and pancreatic size in the Japanese patients with T1D.

Participants
A total of 71 patients with T1D and 39 age- and body mass index (BMI)-matched non-DCs from the Showa University Hospital (Tokyo, Japan) were selected for enrolment in the present retrospective study. The study was conducted by adding 37 patients with T1D to a population we studied in our previous research [15]. Based on the diagnostic criteria and clinical information at diabetes onset, the patients with T1D were classiﬁed into two subtypes: acute-onset T1D (n = 32) [16] and SPIDDM (n = 39) [17].

Measurement of Pancreatic Volume
CT images were acquired using a standard clinical protocol for abdominal/pelvis CT by a multidetector CT (LightSpeed Plus [4DAS] or LightSpeed Plus, GE Healthcare Japan, Tokyo, Japan; SOMATOM Definition AS+ or SOMATOM Sensation64, Siemens Healthcare, Erlangen, Germany). The CT scans were carried out at a tube voltage of 120 kVp, tube current of 180-200 mA (with partial auto-exposure control), tube rotation of 0.5-0.8 s/rotation, pitch factor of 0.6-1.5, and scanning time of 6.2-16 s. PV was calculated from contrast-enhanced or non-contrast-enhanced 5-mm axial CT images. Iodine contrast medium (Iomeron 300, Eisai, Tokyo, Japan; Omnipaque 300, Daiichi-Sankyo, Tokyo, Japan; Iopamiron 300, Bayer Health Care, Leverkusen, Germany) was intravenously injected at a rate of 3.0 mL/s by a power injector. The pancreas was manually outlined on axial image slices for semi-automatic calculation of the pancreatic volume using Ziostation2 (Ziosoft Inc., Tokyo, Japan) software, according to the methods previously reported [15]. The areas of the slices were summed throughout the volume of the pancreas. The images were initially analyzed by one diabetologist (A. Fukase) well trained in the measurement of PV and then confirmed by one experienced radiologist (H. Sasamori). The mean intraobserver coefficient of variation (CV) of the PV was 5.28 % (range, 0.39-9.26 %). The mean interobserver CV of the PV (five cases studied) was 3.31% (range, 1.24-5.09 %). The difference in the measurement of PV by both contrast-enhanced and non-contrast enhanced CT image (five cases studied) was 3.14% (range, 0.25-5.20 %).

Statistical Analysis
Comparisons between the groups were performed using the student’s t-test and the Mann-Whitney U test. Non-parametric correlations were identified using the Spearman’s rank correlation coefficient. The differences were considered significant at a two-tailed probability (P) value of <0.05. All the statistical analyses were conducted with JMP Pro 14.0 software (SAS Institute Japan Inc., Tokyo, Japan). 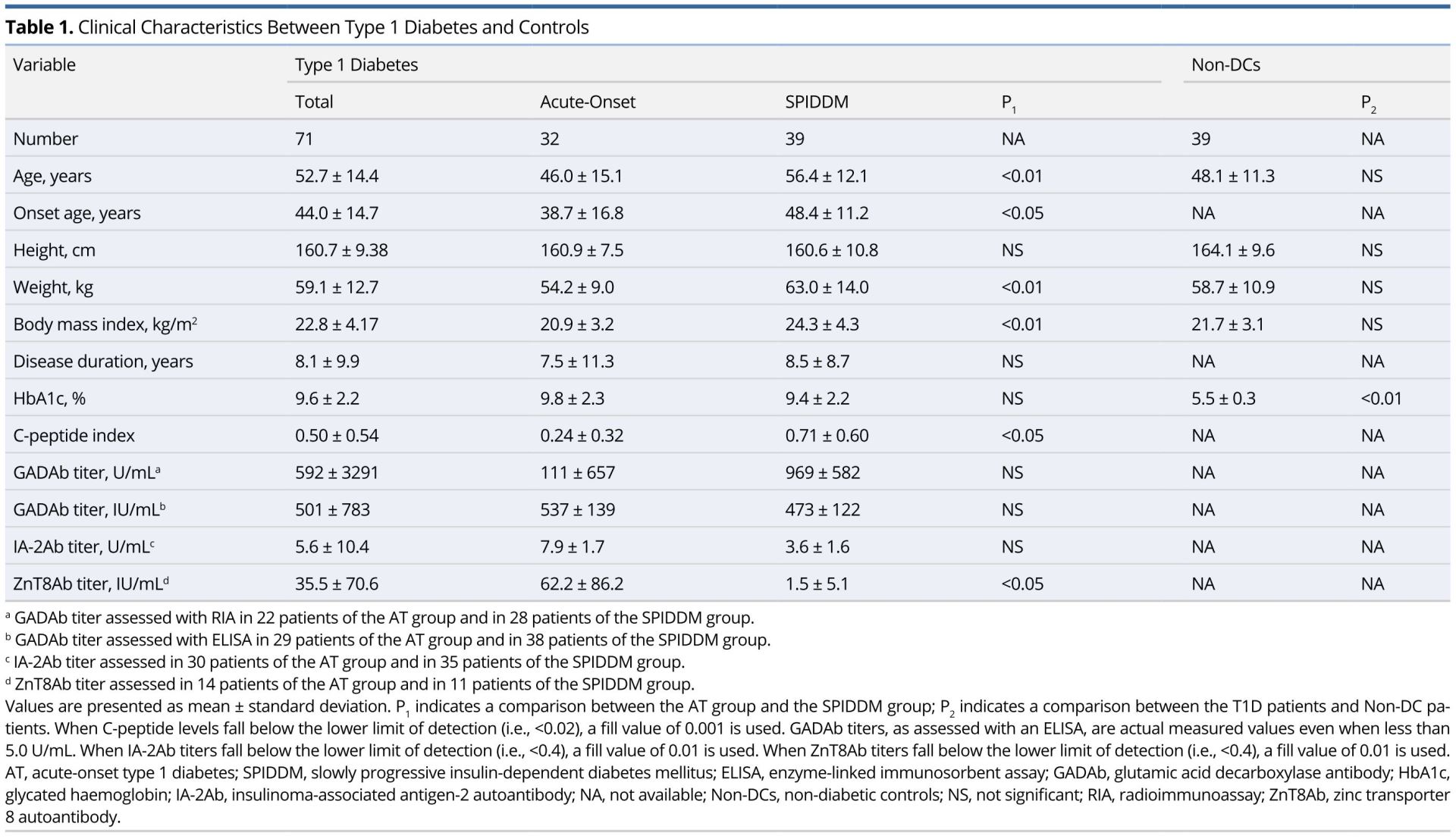 Analysis of Pancreatic Volume
As shown in Figure 1, the PV was significantly correlated with body weight in both the non-DCs and the patients with T1D. Thus, the pancreatic volume index (PVI, PV/body weight) was used for comparisons across multiple groups in the present study. The mean PVI in the patients with T1D was approximately 40% lower than that in the non-DCs (0.65 cm³/kg vs. 1.09 cm³/kg, P <0.0001, Figure 2A). The mean PVI was significantly lower in both the acute-onset T1D (0.57 cm³/kg) and SPIDDM (0.71 cm³/kg) compared to the non-DCs (Figure 2B).

A significant correlation was found between the PVI and the duration of diabetes in T1D and SPIDDM, but not in acute-onset T1D (Figure 3). All of the patients with acute-onset T1D were under intensive-insulin therapy alone. In contrast, the treatment of SPIDDM varied as insulin in combination with oral hypoglycemic agents (OHAs), insulin monotherapy, OHAs, and diet and exercise alone. Thus, we performed additional analysis to examine the correlation between PVI and the treatment for diabetes among the patients with SPIDDM. The PVI was significantly lower in insulin in combination with OHAs, insulin monotherapy, and OHAs compared to non-DCs. There was no difference in PVI between the diet-and-exercise-alone group and the non-DCs (Table 2).

Comparison of the Pancreatic Volume Index Between the GADAb-ELISA (+) and GADAb-ELISA (-) SPIDDM Patients Who Tested Positive for GADAb by RIA
From December 2015, the method for measuring GADAb was switched from the RIA method to the ELISA method in Japan. Although the commercially available GADAb-ELISA is reported to have higher specificity for the diagnosis of T1D compared with the GADAb-RIA in western countries [23], approximately 30% of the SPIDDM patients who test positive on GADAb-RIA are reported to test negative on GADAb-ELISA [24].

Accumulating evidence suggests that the noninvasive imaging of the pancreas often reveals a reduced pancreas size in acute-onset T1D [5] and SPIDDM [6]. The clinical implications of this reduction in the size of the pancreas have yet to be fully understood. The earlier research on pathology has assumed that the mechanisms underlying the reduced pancreas size in T1D largely stems from a loss of insulinotropic effects acting on the exocrine pancreas, as insulin is a potent growth factor for the exocrine pancreas [2-4]. Several groups, however, have reported an absence of any relationship between the PV and residual β-cell function in the acute-onset T1D and SPIDDM patients [12,15]. The data from these reports suggest that the reduced PV of T1D (irrespective of subtypes) is unrelated to the loss of β-cell function.

Reduced pancreatic size has recently been observed in adults with newly diagnosed acute-onset T1D [12] and islet autoantibody-positive non-diabetic donors [14]. In addition, Wiberg et al. reported that the histopathological finding of CD45+ cells infiltration were shown in exocrine pancreas and those cells might contribute to the development of exocrine autoantibodies in the islet-autoantibody positive non-diabetic donors [26]. These suggest that the exocrine pancreatic atrophy and exocrine inflammation might stem from autoimmunity development against both pancreatic endocrine and exocrine cells and precede the onset of acute-onset T1D. Among the different islet autoantibodies, IA-2Ab is well recognized to be a more specific marker of autoimmune-mediated destruction of beta cells than GADAb [20] or ZnT8Ab [21]. Considering that higher titers of IA-2Ab are associated with reduced PVI in T1D, especially acute-onset T1D with high titers of GADAb and ZnT8Ab, we presume that the autoimmune pathogenesis of the disease contributes to reduced PVI in the patients with acute-onset T1D.

Second, the PVI reduction is found to take place over time in SPIDDM, although it begins at or near the disease onset and is minimally altered in the patients with acute-onset T1D who have suffered the disease for as long as several decades. Our group previously reported that SPIDDM patients had reduced pancreatic weight, along with intraepithelial neoplasia (PanIN) lesions accompanied by inflammatory changes [6]. The acinar cells around the PanIN in these subjects were extensively injured or completely lost, with extensive infiltration of inflammatory cells into the area, and ultimately lobular atrophy (unpublished observations by T. Fukui). According to descriptions of postmortem pancreatography by Suda et al., the findings of PanIN increase in frequency as the age of the individual advances [27]. Given that SPIDDM is characterized by a late age of onset and slowly but progressive functional impairment of β-cells [17], a ductcentric lobular atrophy that progressed with time over the course of the disease independently of islet auto-immunity and residual β-cell function might have partly contributed to the reduced PVI of the SPIDDM patients observed in the current study.

There are several limitations in the current study. First, we examined a relatively small sample, and the retrospective and cross-sectional design of the study limited the precision of the results. Second, our outpatient results should be interpreted with caution, as the CT scans and measurements of islet-autoantibodies were not carried at the same time. Third, among islet-autoantibodies, we were not able to clarify the reason why titers of IA-2 Ab alone was associated with reduced PV in patients with T1D. However, since these pa-tients with high IA-2Ab titer had GADAb-ELISA and ZnT8Ab in high levels, titers of IA-2Ab was presumed to be indicative of reduced PV in autoimmune-related T1D. Finally, the study shed no light on the precise mechanism(s) underlying the PVI reduction in acute-onset T1D or any explanation as to why the reduction took place irrespective of the disease duration. A large cohort of patients at high risk of developing acute-onset T1D would be required to clarify the mechanism(s) of the decreased PVI in acute-onset T1D.

This report did not receive any specific grant from funding agencies in the public, commercial, or not-for-profit sectors.

We greatly appreciate Professor Tetsuro Kobayashi of the Division of Immunology and Molecular Medicine, Okinaka Memorial Institute for Medical Research for the excellent advice for the current study.

Results from this study were presented at the 61st annual meeting of Japan Diabetes Society in Tokyo on May 24-26, 2018.

© 2019 The Author (s). This is an open-access article distributed under the terms of the Creative Commons Attribution 4.0 International License (CC-BY).

In this study, Fukase et al. examined the relationship between pancreas volume (PV) and titers islet autoantibodies in acute-onset T1D and SPIDDM. The PV was measured by CT in 71 patients with T1D (32 acute-onset and 39 SPIDDM) and 39 age- and BMI-matched non-diabetic controls. They found that patients with T1D with high titer of IA-2Ab showed reduced PV compared with those without. Changes in exocrine pancreas in patients with T1D is currently an active research area and of importance to explore the mechanisms of T1D development. Although the retrospective study design and small sample size were limitations of the study, the findings were clearly presented, and the manuscript was well-written. However, some issues need to be addressed further.

The authors showed that high titers of IA-2Ab reflect reduced pancreatic size in type 1 diabetes patients, although there was no significant correlation between the pancreatic volume index (PVI) and titers of GADAb and ZnT8Ab in acute-onset type 1 diabetes and slowly progressive insulin-dependent diabetes mellitus (SPIDDM). The findings are novel and important, but there are several issues of concerns.