Ectopic hamartomatous thymoma is a rare tumor with uncertain histogenesis. In this paper, we present a rare case with a description of its histopathological and immunohistochemical features, along with its possible histogenesis. The case is about a 60-year-old male patient who had been suffering from swelling of the neck for 10 years. Clinical and imaging findings were suggestive of lipoma. When examined under a microscope, the tumor was found to be composed of mature adipose tissue, spindle cells and epithelial islands. The epithelial component was arranged in solid nests and tiny cystic spaces lined by cuboidal cells. There were fascicles of plump spindle cells with intervening delicate spindle cells. On conducting immunohistochemistry, it was observed that Pan CK was positive in the epithelial and plump spindle cells. The cell nests were positive for p40 and negative for PAX 8. The periphery of the cell nests and spindle cells were positive for myoepithelial markers SMA, CD10, calponin, and D2-40. Cells lining the cystic spaces at the center of the cell nests were positive for CEA. The plump spindle cells were negative for CD34. On follow up examination, it was found that there was no evidence of recurrence or metastasis after 6 months of resection. In conclusion, morphological and immunohistochemical findings do not suggest a thymic origin but point to the possibility of a tumor arising from branchial remnants. The plump spindle cells were found to be myoepithelial in nature and had phenotypic and histogenetic similarity to the peripheral layer of epithelial cell nests. Hence, we suggest that the existing term of ectopic hamartomatous thymoma is inappropriate and be replaced with a suitable nomenclature that aptly denotes its phenotype comprising epithelial, myoepithelial and mesenchymal components. We also favor re-designating and re-classifying this entity.

Ectopic hamartomatous thymoma is a rare tumor occurring in the lower part of the neck. It is a benign tumor consisting of variable admixture of adipose tissue, spindle cells and epithelial islands. Till 2018, a total number of 80 cases have been reported in literature [1,2]. In this paper, we report one such case in which a subcutaneous suprasternal mass clinically and radiologically mimicking lipoma was observed. We describe in detail its histopathological and immunohistochemical features, its possible histogenesis, and a review of relevant literature. The paper also emphasizes the need for re-designating and re-classifying this type of tumor.

This paper describes the case of a 60-year-old male patient suffering from swelling of the neck for 10 years. The swelling was gradually increasing in size and was observed to be non-tender. It did not move with deglutition or protrusion of tongue. There was no history of loss of weight or appetite. The patient did not have a family history of such a tumor. On examination, it was observed that there was a subcutaneous mass in the suprasternal notch, of soft consistency. Pallor, icterus, lymphadenopathy or organomegaly were not found. Laboratory parameters revealed a normal hemogram. Chest X ray and echocardiography did not reveal any abnormality. High-resolution real-time ultrasound of the neck showed a large well-defined heterogeneous mass primarily hyper echoic in the left paramedian supra sternal area, with cystic septations. There was no evidence of calcification or internal vascularity. It was observed that the mass was separate from the thyroid gland. The thyroid was unremarkable. No enlarged lymph nodes were seen. Contrast enhanced computed tomography of the neck and upper part of the chest showed a well-defined dense space of soft tissue occupying lesion in the anterior aspect of the neck in left paramedian location measuring 6.4 x 5.3 cm. There was no evidence of calcification. The lesion was located in the subcutaneous plane with splaying and compression of the left sternocleidomastoid muscle anteriorly towards the left lobe of thyroid suggesting the possibility of lipoma/dermoid cyst (Figure 1). Fine needle aspiration cytology suggested the presence of a skin adnexal tumor.

In addition, the patient had an expansile lucent contrast enhancing lesion with thick sclerotic rim in the greater wing of sphenoid extending to pterygoid plate pressing the sphenoid sinus, which suggested the presence of fibrous dysplasia. The suprasternal mass was excised with a clinical suspicion of lipoma and sent for histopathological examination.

The mass was well circumscribed and had a smooth surface. The cut section of the mass was entirely solid, yellow to gray white in color. During microscopic examination, it was seen that the tumor was composed of mature adipose tissue, spindle cells, and epithelial component in varying proportions (Figure 2). The epithelial component was observed as consisting of stratified squamous epithelium arranged in anastomosing cords, solid nests, and islands. Some of the cell nests showed central cystic spaces lined by squamous or cuboidal epithelial cells. In addition, large cystic spaces lined by glandular epithelial cells were also observed. In some epithelial islands the centrally located cells showed increased keratinization and squamous pearl formation. In some foci the epithelial cells showed cytoplasmic clearing. The predominantly present plump spindle cells were arranged in fascicles and lattice-like network. These cells had oval to elongated nuclei with finely dispersed chromatin with an indistinct eosinophilic cytoplasm. At several locations the plump spindles appeared to merge with the peripheral cells of epithelial nests/islands. The areas between the plump spindle cells surrounding the epithelial islands and mature adipose tissue showed delicate fibroblast-like spindle cells mixed with clusters of mature adipocytes. In addition, there was a mild infiltrate of small lymphoid cells forming aggregates. There was no significant pleomorphism or mitotic activity in any of the cellular components. Necrosis was not observed. These microscopic findings were consistent with the diagnosis of what is referred to as “ectopic hamartomatous thymoma.”

The details of the immunohistochemical findings of the different constituents of the lesion are summarized in Table 1 and illustrated in Figure 3 and Figure 4. The postoperative course was uneventful, and the patient was discharged. The follow-up examination of the patient showed no evidence of recurrence or metastasis after 6 months of resection. 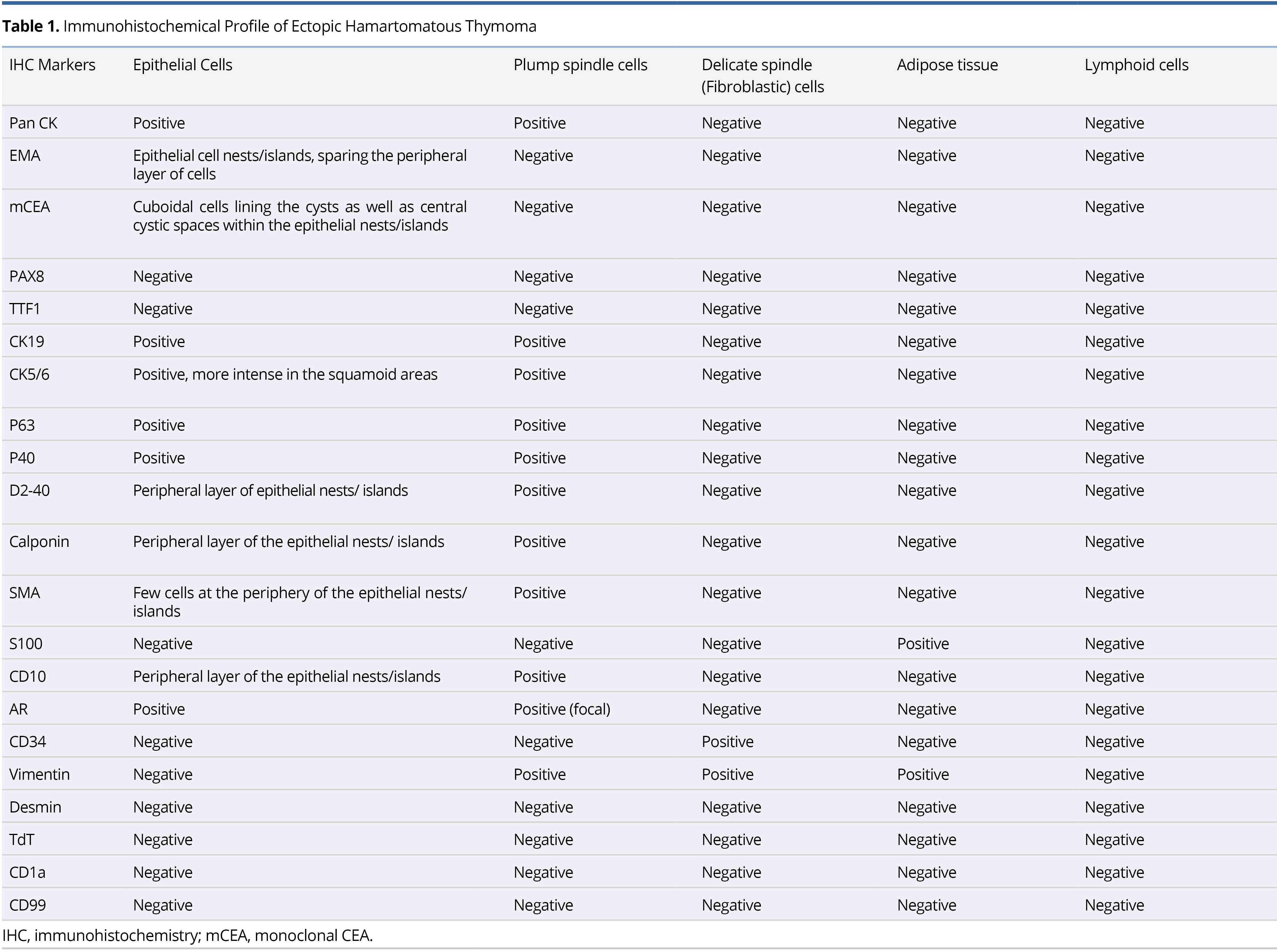 The morphological and immunohistochemical findings of the present case are in agreement with previous observations denying thymic origin. As stated previously, the tumor does not affect mediastinum and does not show thymic elements [8]. This tumor also lacks the characteristic lobular architecture of thymoma. The lymphocytic component in this lesion is minor and lacks CD99, TDT and CD1a which characterize thymic lymphocytes. Although Lee et al. favored a thymic origin because of the presence of CD99+ lymphocytes in this lesion [9], other studies including the present one refute this observation [10,11]. The absence of PAX8 staining and presence of myoepithelial component as evidenced by combined positivity for SMA, CD10, calponin, p63, and p40 further emphasize the non-thymic origin of this tumor. Further, in the present case, we demonstrated D2-40 staining in the peripheral layer of epithelial islands and plump spindle cells similar to expression of the other myoepithelial markers. Though D2-40 is a popularly known lymphatic endothelial marker and has been found to be expressed in myoepithelial cells, expression in ectopic hamartomatous thymoma has not been evaluated till date [12].

Based on the above morphologic and immunophenotypic features, we stress the need to discontinue the existing term of ectopic hamartomatous thymoma and replacing it with suitable nomenclature that aptly denotes its phenotype and possible histogenesis. We propose a new terminology “Triphasic Epithelial Myoepithelial Mesenchymal Branchial Anlage Tumor (TEMM-BAT)” as it encompasses three important constituents of the lesion (epithelial, myoepithelial, and mesenchymal) and its possible histogenesis in relation to branchial remnants.

We further recommend the removal of this entity from current classification under soft tissue tumors of uncertain differentiation. We propose that it should be re-classified under the newly introduced category of “Tumors and tumor-like lesions of the neck and lymph nodes” in WHO classification of Head and Neck tumors as these occur almost exclusively in the neck with rare exceptions [13].

Ectopic hamartomatous thymoma is a rare neoplasm with classic anatomical location and characteristic histological and immunohistochemical features. Awareness of ectopic hamartomatous thymoma is essential to accurately diagnose these lesions which clinically mimics lipoma. Morphological and immunohistochemical findings do not favor a thymic origin and could represent tumor arising from branchial remnants. Hence, we favor re-designating and re-classifying this entity.

The requirements for authorship as mentioned above have been met. Each author believes that the manuscript represents honest work.

© 2020 The Authors. This is an open-access article distributed under the terms of the Creative Commons Attribution 4.0 International License (CC-BY).

This manuscript presents an interesting idea that there is a need to discontinue the existing term of ectopic hamartomatous thymoma and replacing it with suitable nomenclature that aptly denotes its phenotype and possible histogenesis. The evidence proposed by the authors is logical and solid. This case report provides an important contribution to literature and can be accepted for publication.

Based on the above morphologic and immunophenotypic features, the authors proposed a need for re-classifying the rare condition of ectopic hamartomatous thymoma. The authors further proposed a new terminology “Triphasic Epithelial Myoepithelial Mesenchymal Branchial Anlage Tumor (TEMM-BAT)” as it encompasses three important constituents of the lesion (epithelial, myoepithelial, and mesenchymal) and its possible histogenesis in relation to branchial remnants. Their proposal is quite insightful and reasonable based on their tumor analysis. The abstract is clear and appropriate. Organization of this paper is good. Discussion is thoroughly done. Conclusion is notable. I believe the article will be of interest to the readership of the journal, and I recommend it for acceptance in the present form.