Though papillary thyroid carcinoma (PTC), the most common endocrine malignancy [1], has a mostly favorable clinical course, certain factors, including older age, male sex, larger size, and extrathyroidal extension (ETE), foretell a worse prognosis [2]. A common histologic finding in PTC is that of laminated calcified spheres known as psammoma bodies (PB). These calcifications are often seen within the tumor proper and can range from highly abundant and easily observable to rare and scattered. PB can also be identified within the non-tumoral thyroid parenchyma both in the affected as well as the unaffected thyroid lobe. To attempt to explain the origin of PB, a study in 1980 hypothesized that these calcifications represent thrombosis and subsequent tumor necrosis and calcification of neoplastic papillae within the tumor proper and in intralymphatic spaces [3], the latter of which would explain their presence within thyroid parenchyma remote from the primary neoplasm. Other propositions for PB formation include the secretion of factors by the tumor cells [4] as well as an intracellular mechanism whereby PB are released upon tumor cell death [5,6]. In terms of prognostic value, some evidence is available that PB are associated with ETE, lymph node metastases, occult microcarcinomas, and overall portend a higher risk for tumor recurrence [7-9]. Specifically, in one study, extra-tumoral PB were associated with a higher incidence of tumor multifocality, extrathyroidal extension, and nodal metastasis when compared to tumors with only intratumoral PB [8]. Additionally, the presence of non-tumoral PB was associated with an ipsilateral or contralateral tumor, including microcarcinomas, suggesting the identification of PB within non-neoplastic thyroid parenchyma may warrant entire thyroid submission even if thyroidectomy was performed for benign etiologies [9]. However, other work is contradictory and has not shown a significant association between the presence of PB and histologic evidence of poor prognosis or tumor recurrence [10].

As molecular techniques became more sophisticated, activating genetic mutations along the mitogen-activated protein kinase (MAPK) pathway were identified in PTC [11-13]. Mutations in BRAF are most commonly reported (40%) [14] followed by RET rearrangements (20-30%) [15], and then mutations in RAS (10-15%) [16]. Of these molecular categories, tumors with RET rearrangements demonstrate higher rates of PB as well as lymph node metastases. This suggests that there may be complex interplay among alterations in this signaling pathway, the presence of PB, and nodal disease [17].

Given this information and the somewhat contradictory evidence regarding the prognostic value of PB, we sought to more clearly identify whether PB, specifically in non-tumoral thyroid tissue, correlates with adverse histologic findings and nodal metastases in the classic variant of PTC.

Following approval by our Institutional Review Board, the pathology archives were searched between the years of 2015-2021 for cases of classic type PTC with and without non-tumoral PB. Classic type PTC was chosen as the purely follicular variant of PTC does not produce PB and other variants, such as tall cell, are inherently more aggressive regardless of the presence of PB. Lymph node status was determined based on both clinical and pathologic findings. Multiple board-certified pathologists analyzed the slides (8-micron thickness, hematoxylin and eosin stained). Psammoma bodies were defined as lamellated concentric calcifications identified histologically. Cases with unknown lymph node status were excluded from the analyses. Patient demographics and pertinent histologic information were extracted from the pathology reports. Hematoxylin and eosin stains were used to analyze all slides and a Podoplanin (D2-40) immunohistochemical stain was used to analyze select slides. Chi square tests were utilized to determine statistical significance (P <0.05). Multivariable logistic regression analysis was also performed using STATA software (P <0.05 is significant). 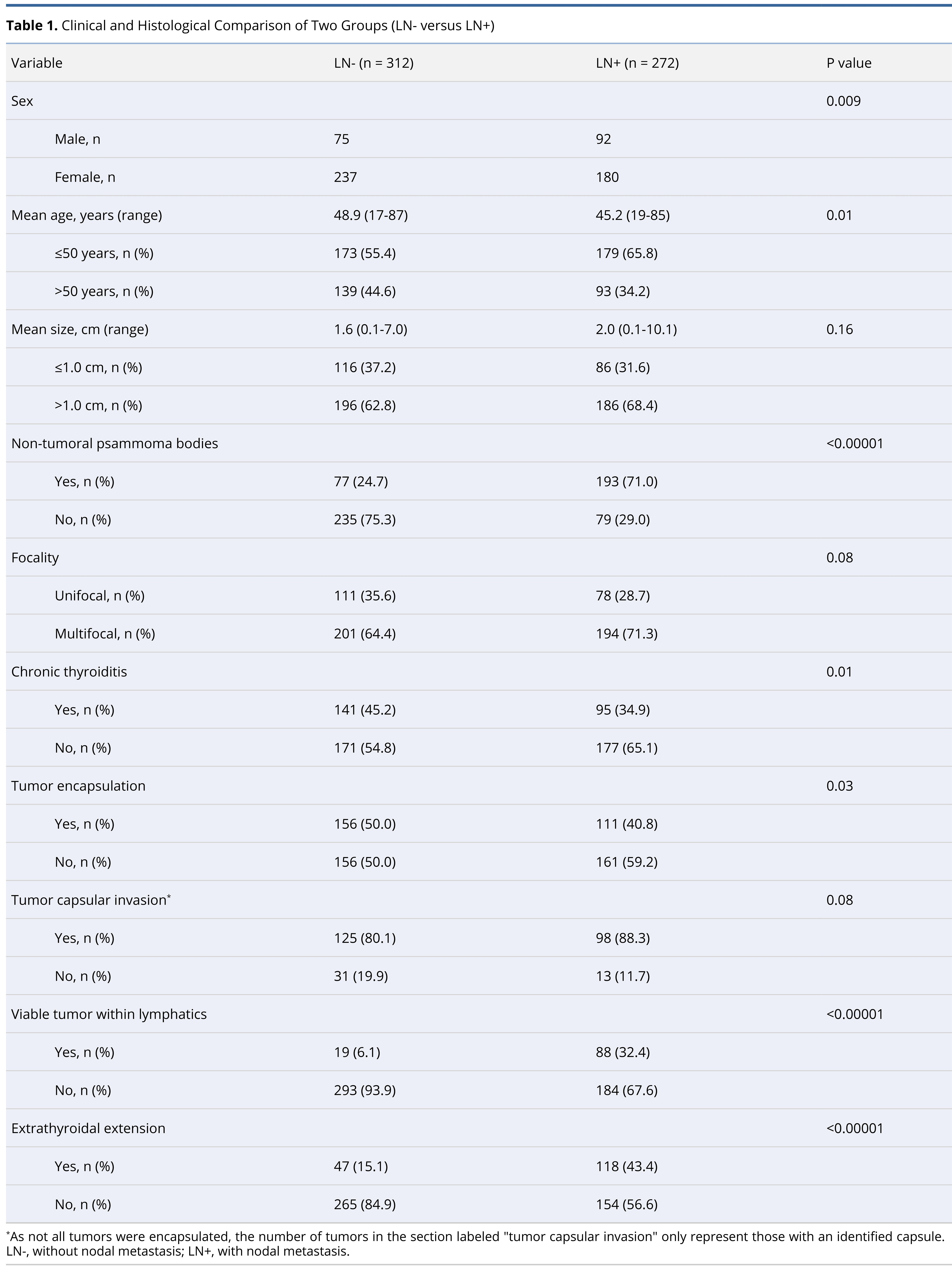 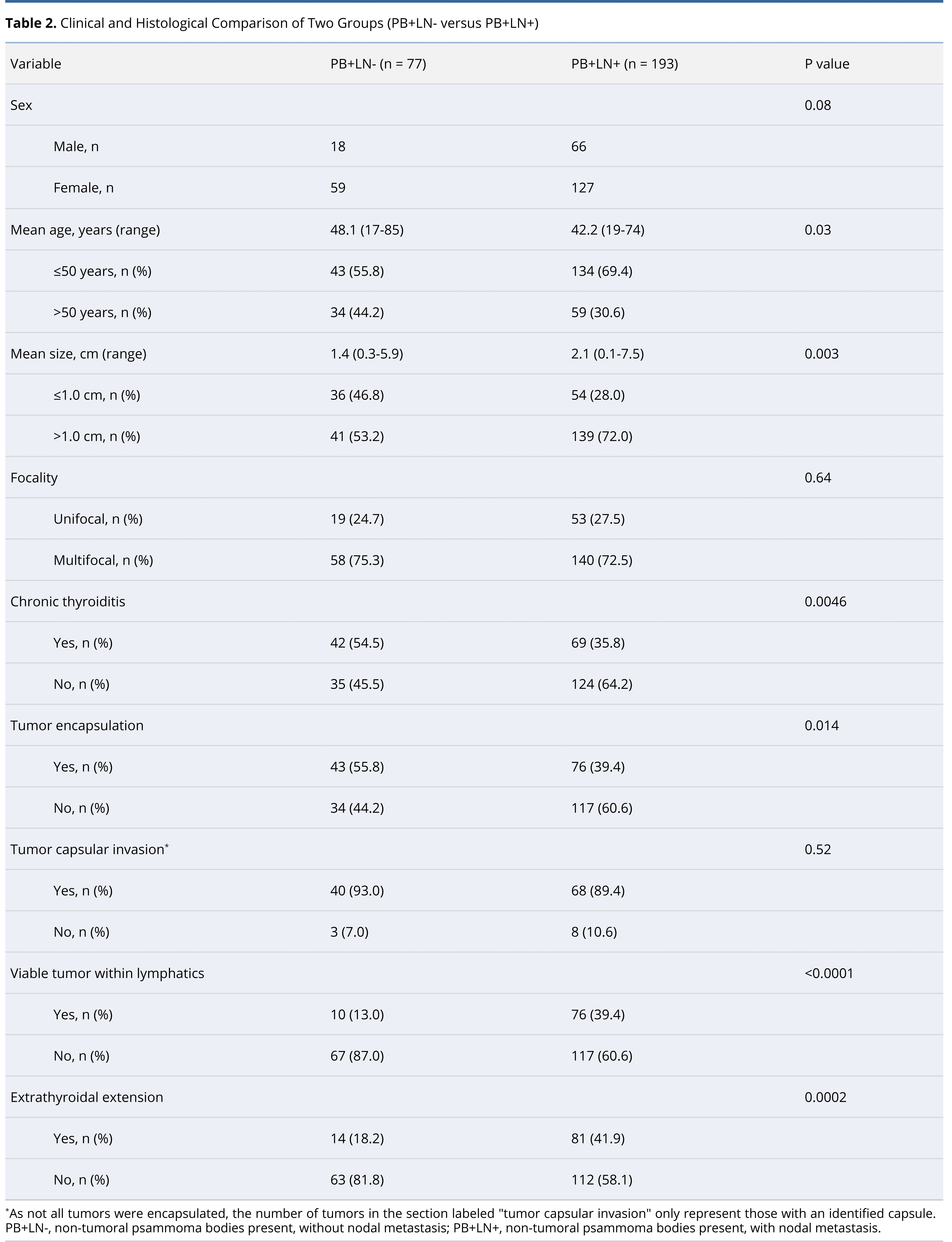 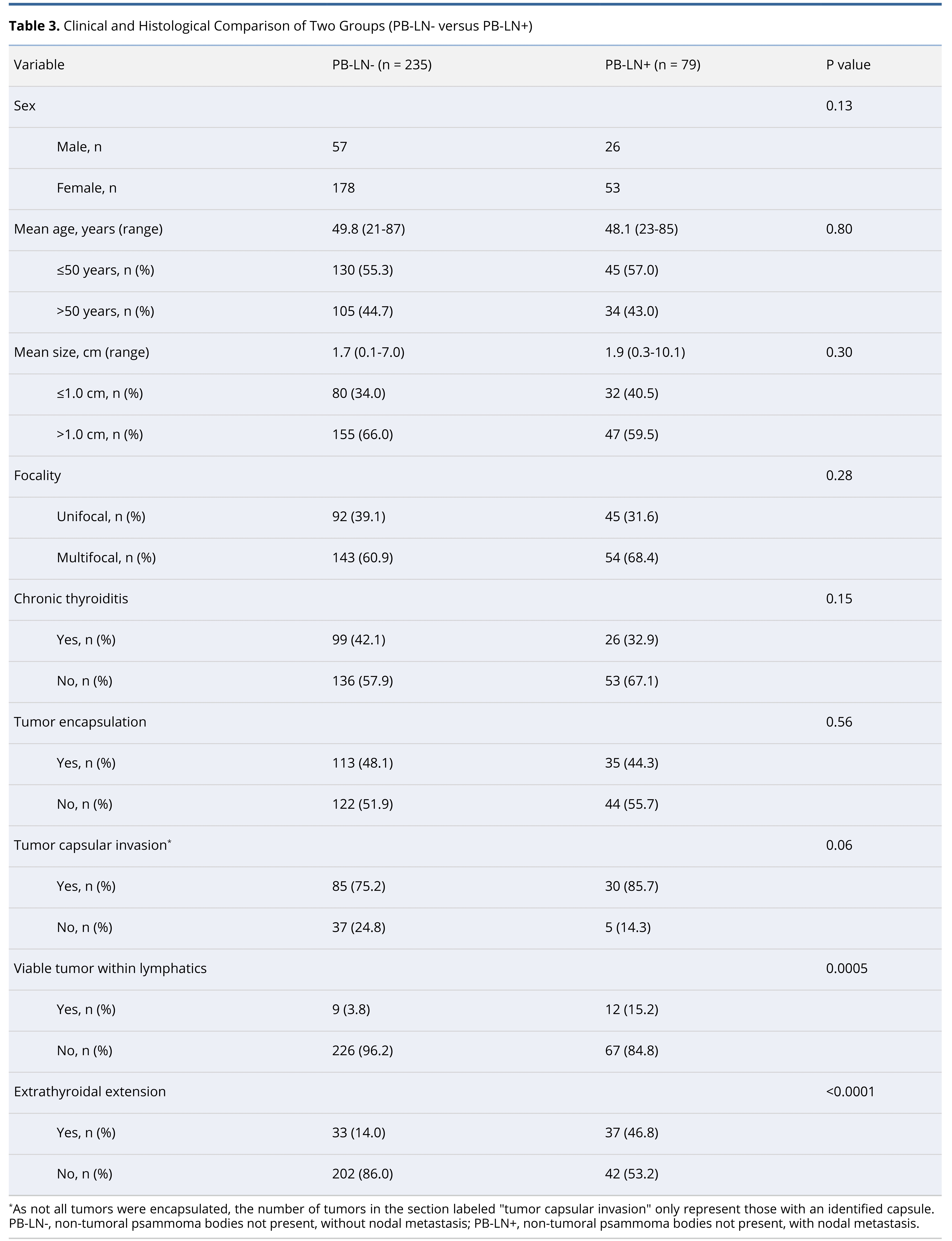 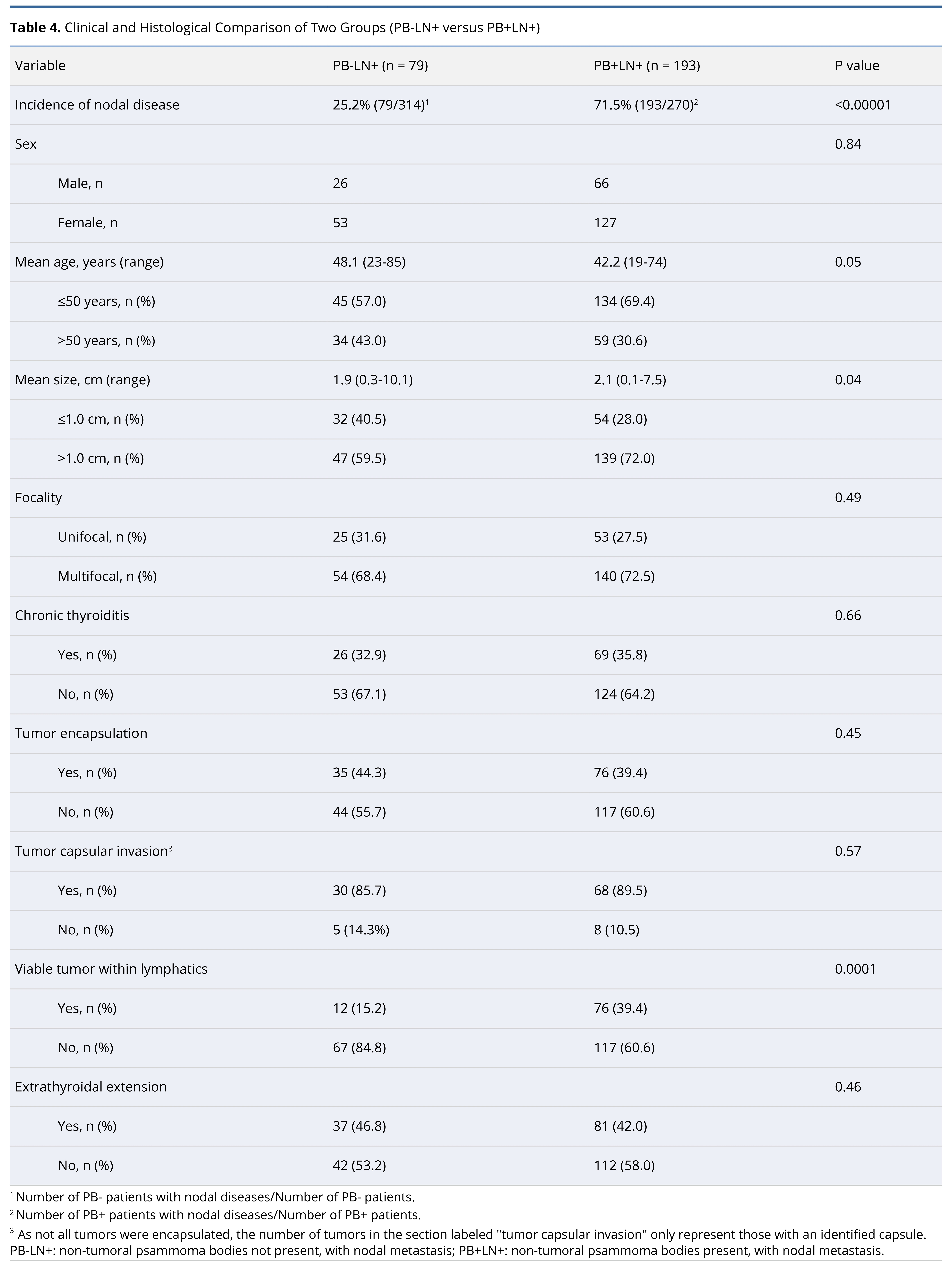 Additionally, we performed a logistic regression analysis to determine the effects of multiple variables on lymph node metastasis (Table 5). We found that multiple factors were significantly associated with nodal disease including male sex (P = 0.002), lack of chronic thyroiditis (P = 0.04), lymphovascular invasion (P <0.0001), extrathyroidal extension (P = 0.002), and the presence of non-tumoral psammoma bodies (P <0.001). Furthermore, we assessed the location of non-tumoral PB and found that they were located within lymphatic channels (Figure 1).

A question that often arises in the discussion of non-tumoral PB is whether non-tumoral PB are truly remnants of viable tumor within lymphatics and not simply multifocal regions of tumor that have calcified. In our extensive literature search to identify a correlation between PB and tumor multifocality, we found that most studies include information regarding tumor multifocality and PB status as it pertains to lymph node metastases and very few actually compare tumors with non-tumoral PB to those without. Our extensive literature search yielded only one paper which made this direct comparison and did show that PB were significantly associated with tumor multifocality [8]. However, we did not find any association between non-tumoral PB and tumor multifocality in our large study. One possible explanation may be the definition of “multifocality” and the inter-observer variability in calling small tumor deposits as true multifocal lesions versus a pocket of lymphatic invasion by tumor. Thus, we support the hypothesis that PB may be “ghosts” of papillae past, including tumor that has invaded into lymphatic spaces, that have thrombosed, necrosed, and consequently calcified rather than discrete multifocal tumor deposits [3] as after careful histologic and immunohistochemical analysis, we confirmed that non-tumoral PB are located within lymphatic spaces in the non-tumoral thyroid parenchyma rather than deposited either within viable tumorlets or within non-neoplastic thyroid follicles. Additionally, we must note that in this study we did not specifically evaluate PB within the primary tumor (the majority of cases of classic PTC have them) nor did we correlate their presence or absence with those present within the lymphatics of non-tumoral thyroid parenchyma. The intra-tumoral PB are usually encountered in the stroma, within the papillae, or within the foci of cystic change and not within the lymphatics. Our study specifically focused on the intralymphatic spaces containing PB within the non-tumoral thyroid parenchyma to support the hypothesis that tumors with this feature tend to have more aggressive features i.e., nodal metastases. Moreover, we cannot identify an alternative mechanism besides calcification of tumor papillae for the presence of PB in non-tumoral thyroid as the thyroid parenchyma surrounding these structures is histologically unremarkable and thus should not be a source for their formation. Taken together, these findings suggest non-tumoral PB act as a surrogate marker for invasive behavior.

While PB are commonly associated with PTC, these calcifications can also be observed in a variety of other tumor types including but not limited to serous ovarian carcinoma [18], lung adenocarcinoma [19], and meningiomas [20]. As in the thyroid, the mechanism by which they form is still poorly understood. However, the chemical composition of PB is fairly conserved across these tumor types and is typically calcium phosphate [21]. PB have also been found to be associated with cellular debris and tumor necrosis [3,21], and ultrastructural studies have corroborated this dystrophic mechanism for PB formation, supporting the hypothesis that the involution of papillae is the most likely source [22,23].

Despite their common occurrence in many papillary tumor types and detailed studies regarding their composition, no conclusive verdict has been reached as of yet regarding the utility of PB in terms of patient prognosis. For example, in serous ovarian carcinoma, the identification of PB was associated with increased tumor apoptosis and longer survival times [18]. In a similar vein, lung adenocarcinomas with PB tend to have EGFR mutations, which are more susceptible to targeted therapies [19]. In PTC, there is some evidence suggesting PB are associated with more aggressive disease [7-9]. These findings taken together with our large comprehensive study add further support for the idea that the presence of PB, particularly in non-tumoral parenchyma, may signify a more aggressive and infiltrative tumor with a higher propensity to involve lymphatic spaces and metastasize to lymph nodes.

Taken together, we have shown that classic variant PTC with non-tumoral PB have significantly higher rates of viable tumor within lymphatic spaces than tumors without non-tumoral PB and are more closely associated with nodal metastases than tumors without non-tumoral PB. We do acknowledge that one limitation of this study is its retrospective nature. Given this information, we believe it is vital to document the presence of PB in non-tumoral thyroid parenchyma as such tumors may behave in a more aggressive fashion and the ultimate prognostic implications of these findings will require additional studies with long term follow-up.

Ethics approval was obtained from the Hospital of the University of Pennsylvania. The study is in accordance with the ethical standards of the 1964 Helsinki declaration and its later amendments or comparable ethical standards.

This research has received no specific grant from any funding agency either in the public, commercial, or not-for-profit sectors.

There are no conflicts of interest declared by either the authors or the contributors of this article, which is their intellectual property.

© 2022 The Author(s). This is an open-access article distributed under the terms of the Creative Commons Attribution 4.0 International License (CC-BY). In accordance with accepted academic practice, anyone may use, distribute, or reproduce this material, so long as the original author(s), the copyright holder(s), and the original publication of this journal are credited, and this publication is cited as the original. To the extent permitted by these terms and conditions of license, this material may not be compiled, distributed, or reproduced in any manner that is inconsistent with those terms and conditions.