Introduction: The anterolateral and anteromedial thigh (ALT and AMT) flaps are the most commonly used thigh free flaps for intraoral reconstruction. Recently, the profunda artery perforator (PAP) flap has been proposed as an alternative. This study aimed to compare the thickness of these thigh flaps and to identify the factors influencing flap thickness in our population. Methods: The study sample comprised legs (n = 72) of patients who underwent head and neck reconstruction with a fibula free flap. Preoperative computed tomographic angiography was used for morphologic analysis. Pearson correlation analysis was used to assess the relationship between flap thickness and different continuous variables. A repeated measures mixed linear model analysis was performed using all the available measurements. The adjusted marginal means of each flap were estimated using a fixed-effect model. Results: Flap thickness was more in women (p < 0.001) and was correlated with body mass index (BMI). The R2 coefficients for ALT, AMT, and PAP were 0.64, 0.69, and 0.48, respectively (p < 0.01). ALT thickness (1.61 ± 0.07 cm) was significantly lower than AMT thickness (2.05 ± 0.08 cm, p < 0.0001). PAP thickness was significantly higher than the thickness of the ALT/AMT flaps when the measurement was made over the first perforator of the adductor magnus (2.31 ± 0.12 cm, p < 0.0001), but there was no significant difference when the measurement was made over the second perforator (1.88 ± 0.09 cm, p > 0.05). Conclusions: Thigh flaps tend to be thicker in women and in those patients with high BMI. The thigh flap that is least influenced by BMI is the PAP flap. The PAP flap harvested around the second perforator of the adductor magnus can be as thin as the ALT flap.

Soft tissue microsurgical reconstruction in the head and neck regions can be performed with different types of free flaps. For decades, the anterolateral and anteromedial thigh regions have been considered as the ideal donor sites [1,2], especially in Asian countries. Recently, the profunda artery perforator (PAP) flap harvested from the posteromedial region of the thigh has been proposed as a good choice for use in oral cavity reconstruction [3,4,5]. However, in the Western countries, thigh flaps, especially the PAP flaps, are not used as often as in the Asian countries for oral reconstruction because there are concerns regarding the greater thickness of thigh flaps as compared with the radial forearm free flaps (RFFF).
There are previous publications on anterolateral thigh (ALT) flap thickness measured with Doppler ultrasound [6,7] and only one study using computed tomographic angiography (CTA) [8]. However, none of these studies compare ALT flap thickness with PAP flap thickness in the same patient.
The aim of this study was to compare the PAP flap thickness with the thickness of other thigh flaps that were more commonly used for intraoral reconstruction and to identify the factors influencing its thickness in our population using CTA. This information would be useful to facilitate flap selection based on desired tissue volume in patients with greater thigh thickness, like our population.

Study Sample The study sample comprised 72 legs of 36 patients. The inclusion criteria were the patients who underwent head and neck microsurgical reconstruction with a fibula free flap and a preoperative CTA. The exclusion criteria consisted of the antecedent of previous thigh flap harvested. CTA was performed on a 64-slice multiple detector computed tomography scanner (LightSpeed VCT; GE Healthcare, Milwaukee, WI, USA) using a standardized protocol. Data post-processing was done using the open-source software HorosTM v 1.1.7 (GNU Lesser General Public License, version 3).
Morphologic analysis of flap thickness and perforator location was done for the ALT flap, the anteromedial (AMT) flap, the distal superficial femoral artery perforator (d-SFAP) flap, and the PAP flap in all 72 legs. The d-SFAP flap is not commonly used for intraoral reconstruction, but it was also included in this study because of the constancy of the location of its perforator. For the ALT flap, the references were the anterior superior iliac spine (ASIS) and the superolateral border of the patella. The best perforator around the midpoint between both references was identified and its location relative to the ASIS was registered. The same references were used for the AMT flap. The cutaneous perforator of the AMT flap was located close to the intersection between the rectus femoris and sartorius muscles. The perforator’s location (relative to the ASIS) and its origin—whether arising from the lateral circumflex femoral artery (LCFA), medial circumflex femoral artery (MCFA), or superficial femoral artery (SFA) — were identified. For the PAP flap, the references were the ischial tuberosity and the superomedial border of the patella. The first and second perforators of the adductor magnus were registered. So, two PAP flaps were considered in each leg: one PAP flap based on the first proximal perforator of the adductor magnus (PAP1) and another PAP flap based on the second or distal perforator (PAP2). The d-SFAP flap was based on a direct cutaneous branch of the SFA. The references used to locate this branch were the pubic tubercle and the superomedial border of the patella (Figure 1).
To allow comparisons between the patients with different thigh lengths, longitudinal measures were expressed as a percentage of the total length between the reference points for each flap. Flap thickness was measured at the point where the cutaneous perforator entered the deep fascia (Figure 2).

Statistical Analysis Statistical analysis was done using R v 3.1.1. (CRAN, Vienna). Normality was assessed using the Kolmogorov-Smirnov test and by visual inspection of the shape of histograms. The independent samples t-test was used to test the statistical differences between the means of the two given groups, as in the comparison of flap thickness in men and women. Pearson correlation analysis was used to assess the relationship between flap thickness and different continuous variables. A repeated-measures mixed linear model analysis was performed using all the available measurements of the total thickness (36 subjects, 72 legs, 360 flaps). The type of flap (ALT, AMT, d-SFAP, PAP1, PAP2) and side (left or right) were included in the model as repeated measures factors. The most appropriate covariance structure for the residuals (repeated covariance type) was a first-order autoregressive structure with heterogeneous variances. Parameters were estimated using the maximum likelihood method. A fixed-effect model was built and the marginal means of each flap were estimated, taking into consideration of the covariates such as sex, body mass index (BMI), and the relative distance from the proximal reference point to the point where the thickness of each flap was measured (longitudinal measures were expressed as a percentage of the total length between the reference points for each flap). Bonferroni adjustment was used for multiple comparisons. The threshold for significance was set up to 0.05. 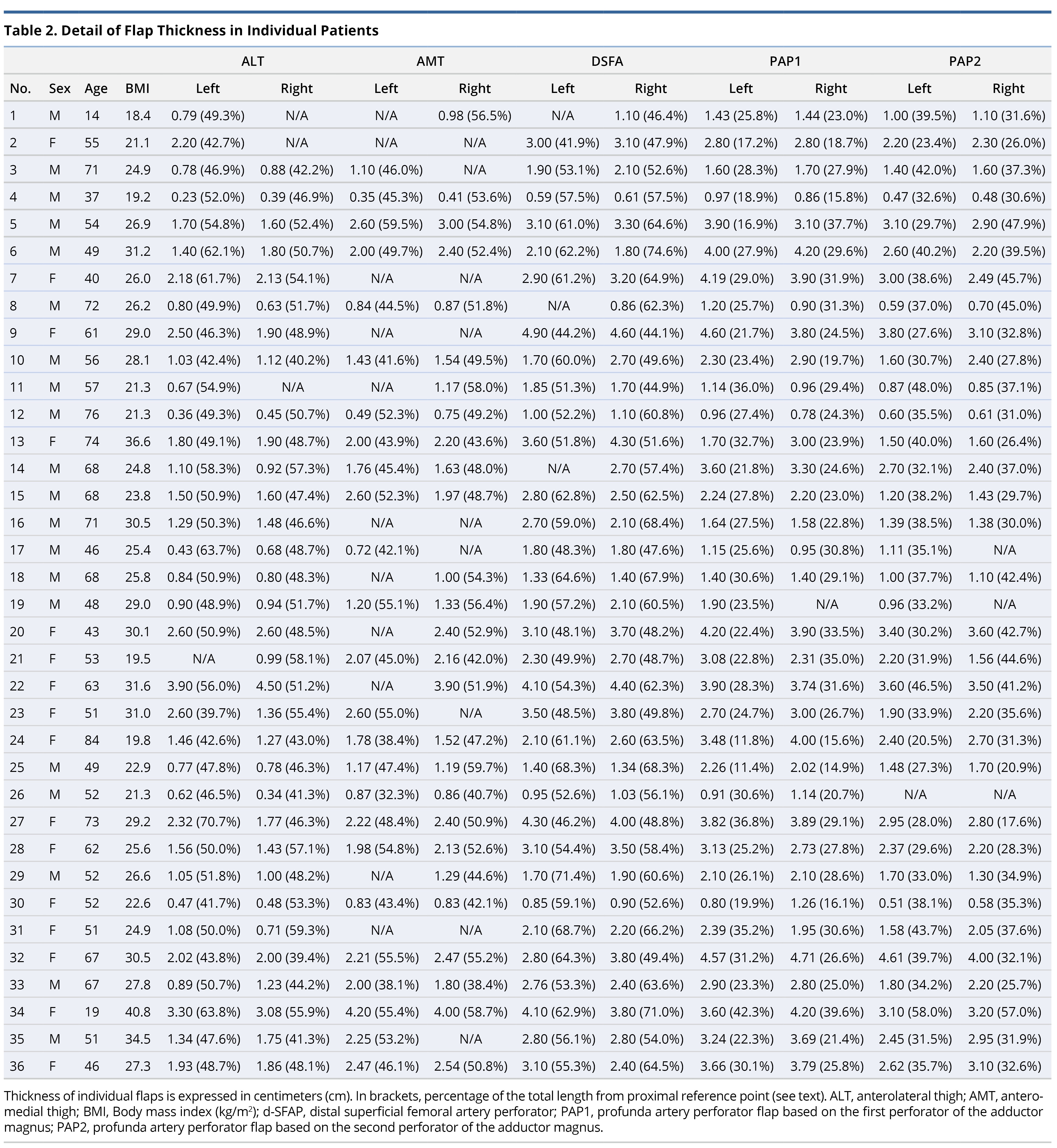 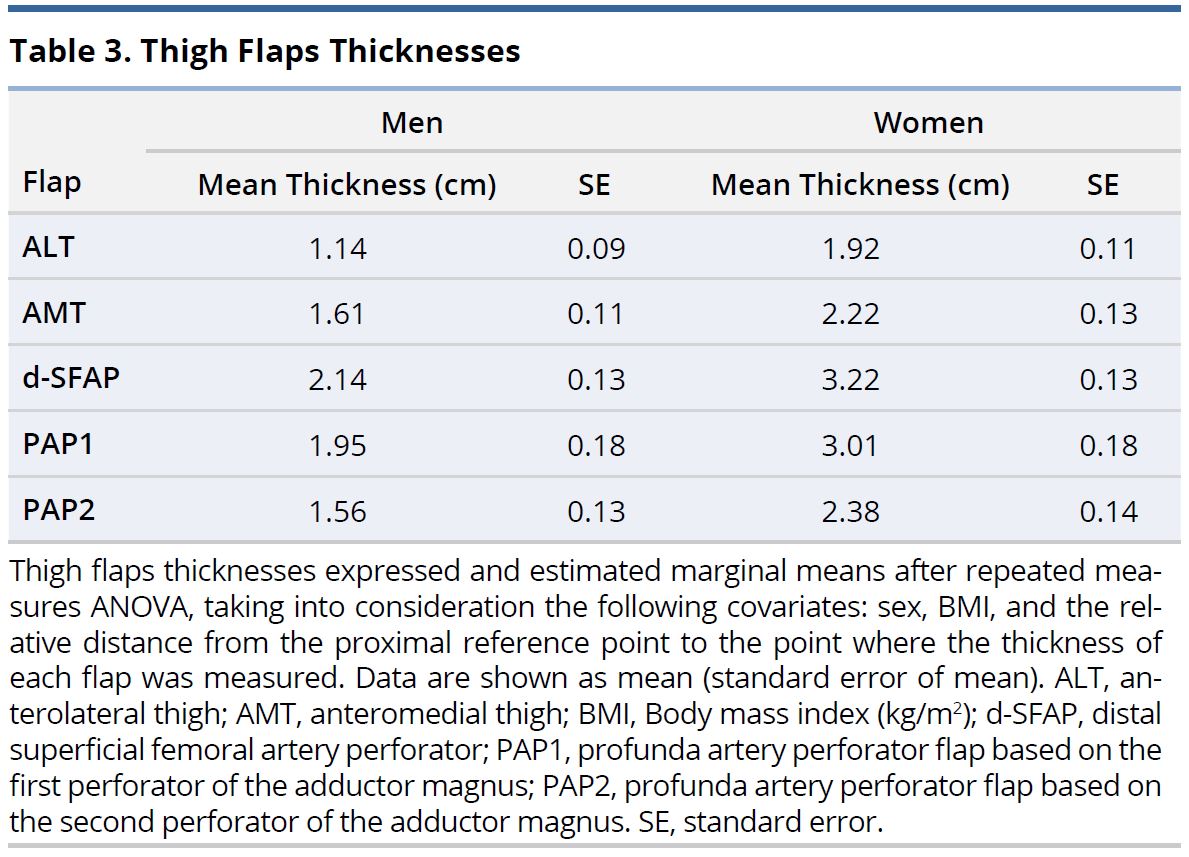 Intraoral reconstruction can be performed using different types of thigh flaps. Flap thickness is an important factor to be considered during flap selection. In this paper, we present our anthropomorphic analysis of different thigh flaps in a Spanish population.
The locations of the best identifiable perforators for the ALT flap in our sample are similar to those described in the previous reports [1]. For the AMT flap, the most common origin of the perforator found at the intersection between the rectus femoris and sartorius muscles was the LCFA, which was similar to the previous reports [9]. Mojallalal et al. [10] have described the constancy of the location of the d-SFAP flap perforator at a mean distance of 22.79 ± 1.55 cm from the pubic tubercle and in close relation with the saphenous vein, which is comparable to the mean distance of 20.5 ± 3.17 cm in our study. Our data are also consistent with other studies that have found most of the perforators of the PAP flap located 8-10 cm from the pubic crease [3].
Previous researchers have used ultrasonography to evaluate the thickness of the ALT free flap. In 2002, Nakayama et al. [6] performed an ultrasonography study of living head and neck cancer patients and reported the mean thickness of skin and subcutaneous tissue of the ALT flap in their population as 7.1 ± 3.4 mm. Aladimi et al. [7] reported a mean thickness of 14.5 ± 4.2 mm for the ALT flap; this relatively high value was probably because the volunteers in their study were all healthy and Americans. Hsu et al. [8] reported a lower mean thickness of 9.8 ± 4 mm in 202 healthy volunteers from Taiwan. These data from Doppler ultrasound studies suggest that the flap thickness varies with ethnic origin and health status and it appears to be less in Asian patients than in Westerners.
There was only one previous study using CTA to assess flap thickness and it was performed in a Western population (106 patients) to assess only the ALT flap [11]. The mean thickness of ALT flaps in men and women in that study were 9.9 and 19.9 mm, respectively, which were comparable with our findings. However, there were no previous publications to assess flap thickness with CTA on other thigh flaps.
Similar to our study, earlier studies have also demonstrated thicker subcutaneous fat in the anterior thigh region in female patients than in male patients [8,11,12,13], and also the ALT flap thickness has been correlated with BMI [8,11,13,14]. In the present study, we have demonstrated for the first time that there exists a correlation between flap thickness and BMI and gender in all thigh flaps studied, including the PAP flap. Moreover, the PAP flap appears to be the least correlated with BMI.
In addition, the difference in thickness of subcutaneous fat between upper and lower parts of the anterior thigh has been reported [12,13]. Nevertheless, to date, there has not been any anthropomorphic analysis of the thickness of PAP as compared to the thickness of ALT or AMT free flaps in the same patient.
The PAP flap has become an ideal choice for autologous tissue breast reconstruction as an alternative to the deep inferior epigastric perforator flap [15]. However, there are few reports regarding its use for intraoral reconstruction [3,4,5]. The main concern in our population could be its greater thickness compared to the ALT flap, but with our results, we can show that there is not much difference when the PAP flap is designed around a distal perforator. Our current results may encourage the decision for harvesting a PAP flap as an alternative to an ALT flap when the indication is made for intraoral reconstruction.
In our study, the population included oncological patients. Nutritional status of these patients could be influencing our final results. Nevertheless, one of the most common reasons for microsurgical reconstruction of the head and neck in an adult patient is head and neck carcinoma. However, future research on correlating nutritional status with skin thickness will be useful in order to clarify the differences between series with healthy and/or head and neck cancer patients.

All thigh flaps, including the PAP flap, tend to be thicker in women and in those patients with high BMI. The thigh flap that is least correlated with BMI is the PAP flap. Besides, the PAP flap thickness is not significantly different from that of the ALT/AMT flaps when the measurement is made over the second perforator of the adductor magnus muscle. Hence, harvesting the PAP flap around a distal perforator makes it easier to obtain a flap as thin as the ALT flap used in the same patient. Because of the similarity in thickness, the PAP flap can be considered in our population to be a good alternative of the ALT flap for intraoral reconstruction.

This study adhered to the principles of the Declaration of Helsinki in terms of medical protocols and ethics and was approved by the institutional ethics committee (Reference number 3965) from the Reina Sofia University Hospital, Córdoba, Spain.

Partial content of this manuscript was presented at the 24th Congress of the European Association for Cranio Maxillo Facial Surgery, 18-21 September 2018, Munich, Germany under the title of “Thigh Free Flap Thickness in Western Population: Customizing Free Flaps for Tongue Reconstruction”.

© 2019 The Authors. This is an open-access article distributed under the terms of the Creative Commons Attribution 4.0 International License (CC-BY).